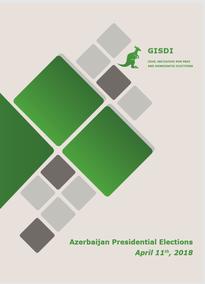 Results of GISDI overall observation of Republic of Azerbaijan Presidential Elections, held on 11 April 2018 show that they were conducted in accordance with the principles of free and fair democratic elections, thus expressing the free will of people and protecting their political and civil rights. The organization and conduct of the Presidential elections were in conformity with the fundamental freedoms.
*   *   *
Generally, there are no empirical grounds for arguing that fundamental democratic principles were not preserved on these presidential elections. The opportunity was given to the people of Azerbaijan to make freely their political choice and to vote in a calm atmosphere.
However, our observers have registered few problems in the electoral campaign, ifringements in voting and counting process, cases of not so good arrangement of PSs rooms. They in their totality do not provide any sufficient ground for cummulated negative assessment of electoral process as a whole.
Taking into account various considerations and opinions of its observers, GISDI have outlined some concrete recommendations for further amendments and improvement of election process in Republic of Azerbaijan.