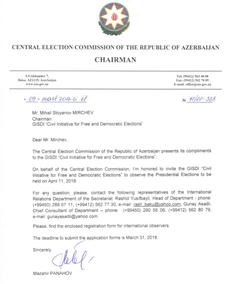 Following an invitation to observe the Early Presidential Elections on 11 April 2018 by the Central Election Commission GISDI is organizing an international election observation mission. The mission is headed by Mihail Mirchev, Dr. Sc. The analytical Core team of the mission consists of political, legal, election, media and civil society analysts. The election day, the day pre- and post e-day will be observed by 70 short term observers – all of them are Members of Parliament, university professors mainly from South-Eastern Europe.

The purpose of the mission is to assess democracy and fairness of the electoral process, election campaign environment, preparation and organization of the elections as well as e-day and post e-day activity. To achieve its purpose GISDI is planning to:
-    representatives of election administration and other state institutions;
-    candidates’ and media representatives;
-    civil society and business organizations;
-    domestic election observers.

Based on the obtained information, different points of view and assessments of campaign and electoral process GISDI will give recommendations for further improvement of the electoral process and democratization.

GISDI understands its responsibility to CEC, to international standards of democratic elections, to Azerbaijan civil society in conducting the election observation mission – reporting findings and giving recommendations for further improvement.